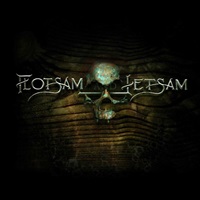 ‘Hari… KARI!’… the scream from Eric AK that will forever lodge Arizona’s Flotsam and Jetsam into the annals of thrash. The title track off No Place from Disgrace pushed the band’s musicianship and power/speed riffing to another level, proving the band could survive bassist Jason Newsted’s ascension to Metallica’s ranks. Active since 1984 as F&J, the band issue another studio platter under their namesake, new label AFM rising to the occasion and feeding off a slew of headlining dates plus touring with Testament and Overkill in North America to properly remind audiences of their sharp instinctual abilities.

In Flotsam and Jetsam, it’s all about the best hooks and melodies that slam deep into the cortex, making for furious head banging or scream along moments – and the band wastes no time getting down to business through the Gilbert/ Conley twin harmony tricks and heads down thrash parade that is opener “Seventh Seal”, the main hook harkening back to those exotic/militant late 80’s. Cognizant of lower, more aggressive ethics that younger bands employ, aspects of that sharpen “Taser” into an explosive cocktail that is part punk, part haunting – the rhythm section of bassist Michael Spencer and drummer Jason Bittner key in keeping the changing atmosphere of the arrangement on point. Exhilarating licks that evoke British tandem ethics signal the start of another bruising highlight “Iron Maiden”, power/thrash fanatics should gravitate to the straightforward riffing and equally exciting Eric AK note holding mid to high range delivery as another medieval torture device lyrically unfolds.

Flotsam and Jetsam also encompasses dynamic substance in the album’s second half – “L.O.T.D.” containing a lot of Erik’s propensity for speedy venomous verbal ecstasy while resurrected closer “Forbidden Territories” comes from the songwriting sessions for No Place for Disgrace – a 6:44 epic containing Spencer’s pulsating bass, killer lead breaks throughout, plus some of the most twisted, charging musical parts and power assembled in the band’s history to make another thrash-riffic masterpiece (think proper sequel to “I Live You Die”). At this point in a long career, the band appears content to keep most of the focus on delivering proper melodic power thrash while not discounting the contribution of occasional heavier/modern elements – making this record one of their best easily in twenty plus years, something most of us have been waiting for since the When the Storm Comes Down/Cuatro days.