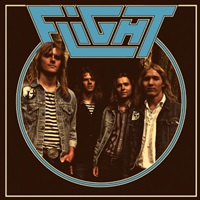 Spawning countless musicians to pick up an instrument, form bands, and give their own take on the metal genre, the original New Wave of British Heavy Metal movement deserves its deep case studies not only for individual superstars like Iron Maiden and Saxon but also the underground spirit as a whole. It’s great to see younger bands embrace the electricity of that era, and not just from the United Kingdom. Let’s take to the skies of Norway for the aptly named Flight on their eponymous debut album – bathe in the glory of eight tracks that reflect, respect, and cherish catchy chord construction, rock solid rhythm section work, and choruses tailored for audience participation.

The quartet keep their look very blue collar (three-fourths adorning denim on the cover) and have a similar philosophy in regards to their sound. Keeping the accelerator to the floor relative to their influences, there’s an equal love for Judas Priest, Iron Maiden, Trespass, and even early Sunset Strip bands like Motley Crue or W.A.S.P. when it comes to the jumpy riffing, guitar lead tradeoffs, and brooding transitions that can highlight bass interludes. “Flight” opens with a main guitar sequences that are as much British Steel as “Live Wire”, “Nightrider” for a 4:47 instrumental has that evil spider web orientation and varied tempo segmentation that put “Phantom of the Opera” in the hearts of worldwide Maiden maniacs and “Escape” is the motorcycle anthem for free spirits.

Guitarist Christoffer also doubles on vocals, and if there is a ‘weak’ portion to point out, his limited mid-range delivery can be a tad monotonous to handle. Remember though, a lot of early NWOBHM bands didn’t necessary have Bruce Dickinson or Rob Halford fronting their style – so it’s possible that if given a little training, there could be slow and steady improvement in this department. Recreating the best aspects of a sub-genre, Flight should gain modest respect from their parents’ generation who were wee lads when this originally took off. 8 songs in 40 minutes, who needs a Tardis to travel 35 years back when these Norwegian gentlemen provide aural throwback proof in record form.