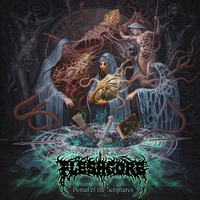 Safely nestled into the category of effective band name, the Ukranian death metal outfit Fleshgore isn’t going to stun anyone with the type of music they play based on name alone. Having assembled back in 2000, the band has sustained a number of line-up changes over the years and carried on. Denial of the Scriptures is their fifth full-length album, and first for the venerable Xtreem Music label.

Brutal death metal that feels quite akin to the style most prevalent back when the band started at the beginning of the century, there is plenty of bark and plenty of bite. It’s all very familiar stuff at this point, but that doesn’t make it any less effective. Fleshgore have a firm grip on the type of songwriting needed for this music and hold it high with conviction. There’s plenty of speed of course, without going after the dizzying heights of modern death metal, but the use of more mid-tempo churning keeps it in line. “Killing Relapse” conveys this well, moving between blast beats and almost Dying Fetus-like groove to keep things rolling. The vocals are guttural, at the very gurgle-y end of the spectrum with some slight variations in tone (think Broken Hope), but are what you would come to expect from the sound.

It’s straight out of the mid-90s to early 2000s book of death metal, but Denial of the Scriptures will still find favor with fans of the sound. The mechanics of their assault are solid, just don’t look for layers of ingenuity to be woven into the fabric of the material. Good, straight-forward death metal that acts as a steamroller – nothing wrong with that.