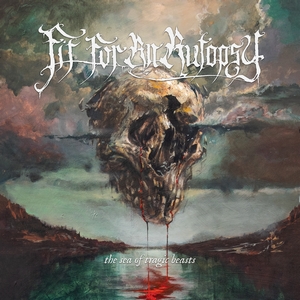 It’s been almost a given as Fit for an Autopsy has aged that each album is going to evolve the band in some way. From the very deathcore beginnings to their last full-length, The Great Collapse, which saw more atmospheric death metal and Gojira-esque grooves making their way into the mix – the band has come a long way and surprisingly with no gripes from the fickle extreme metal scene. The Sea of Tragic Beasts sees them take a massive leap instead of a small jump, and it sits as a potent reminder of how aggressive they can be, but also showcases a more sullen gloom that fits them to a tee.

There’s so much depth to The Sea of Tragic Beasts, even if it may not appear that way at first listen. The band has continued to progress the number of flavors and styles that they incorporate into the band – something that lead singles “Mirrors” and the title track do a good job of bringing out. “Mirrors” in particular sees Fit for an Autopsy being rather vulnerable, with a drawn-out atmospheric opening that then simply leads into riffing that feels as introspective and depression-soaked as it does beefy. It’s dark and foreboding, but somehow still packs that monstrous FfaA punch that fans expect. The title track does the same, with a sense of longing and despair penetrating an otherwise visceral gutpunch of groove (and breakdown later on). Clean(ish) vocals are also showcased in the front here, and come in a natural and fitting way, helping to boost the song instead of provide a more ‘mainstream’ appeal. Closer “Napalm Dreams” really nails this with some desperate singing/growling that really pulls at the emotions of the listener as the closing repeat of “All I wanted was a way out” fades the album to black that causes you to focus back on not only the song, but the album’s message as a whole. Of which, the band’s lyrical prowess has never been sharper or more poignant (check out “Mirrors” for a great sample of this).

For those more interested in a beatdown than moments of melody and sorrow, the band still knows how to deliver. “Warfare” is full of the usual vitriol, from both a musical and lyrical standpoint, and hits in all the right places. “Unloved” contains a bevvy of bone-crushing breakdowns and grooves, and is sure to be a destructive favorite in the live setting. But the band does a really good job of balancing the melancholy and menace throughout much of the offering. “Shepard” takes a hand in almost melodeath riffing and melodies and then dives into groovy slugfests, and “Birds of Prey” takes a doomy, lumbering approach before it knocks into high gear with urgent riffs and ominous grooves. Lastly, “Your Pain is Mine” uses some modern Gojira-like guitar noodling and crunch, but styles it with some of the band’s catchiest melodies to date.

The Sea of Tragic Beasts may not necessarily be the album that many expected from Fit for an Autopsy, but it’s bound to impress and resonate with all those who check it out. It’s an album that can tug at the heartstrings as easily as it can tear it out of the body with vehemence, and sits as a new pinnacle for where extreme metal can go outside the realms of being just ‘pure anger.’ The mixture of sadness and brutality is compelling and fresh, handled in a way that is genuine to the band’s mantra. For all these reasons (and more not discussed directly), The Sea of Tragic Beasts will no doubt sit as one of the year’s strongest and most engrossing albums, positioning Fit for an Autopsy as one of the new leaders within the scene.