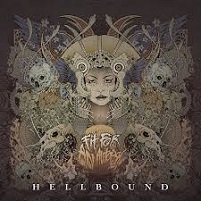 The knives were out when DR was issued Hellbound for review. We tend not to form pre-determined opinions prior to listening to music, but all we could think about was Annotations of an Autopsy, and not the OG Autopsy, who probably cringe when hearing bands like Fit For An Autopsy…maybe Annotations of an Autopsy, too. Anyway, being that these Jersey fellas appear to fall under the modern death/deathcore banner, expectations were suitably low for Hellbound. But that’s why it’s fun to set the bar low sometimes: You’ll be surprised every now and then.

Boasting a lyrical platter that tackles politics (“Thank You Bud Dwyer,” hey; just like Filter!), not-so great parenting (“Mother of the Year”) and obesity (“Children of the Corn Syrup”), Fit For An Autopsy benefits from having substance behind their music, even if the gargled barbs of singer Nate Johnson are of the one-size-fits-all variety. However, the band’s music is like an extension of what The Acacia Strain does, only heavier and more extreme (and better). The eerie pummel of “Do You See Him” is worthy, so are the quasi-melodies on “There Is Nothing Here Worth Keeping,” helping keep the quintet out of the deathcore doldrums altogether.

Not-happy-dude death metal as this tends to be paper-thin when it comes to translating its message, yet Fit For An Autopsy manage to do a good job of maintaining a definitive pulse throughout Hellbound’s running order. Naturally, there’s going to be a boatload of detractors for these lads, and yeah, they’re about two steps from rubbing DR in the wrong direction, but this was a rare instance of modern death metal done well.