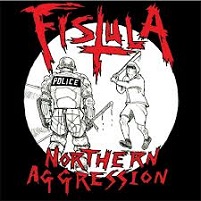 Learning what a fistula is…not a good moment in Blistering’s life. Because we are a family-friendly and generally gross-out adverse website

, we’ll spare you the gory details, so if you want to find out what a fistula really is, click here. You will never think about the human bowel system and its surrounding “exit point” the same way. (These are the things one discovers when their significant other works as a researcher in the colon/rectal department at a prominent Pittsburgh hospital.)

Cleveland’s Fistula have been making the club rounds for the better part of 14 years, with quite a few LP’s, EP’s, splits, and every other kind of format one could conjure up. Their crusty grind sound is made for quick, easy releases like that anyway, for it’s highly unlikely these chaps spend more than a few days recording their material. Northern Aggression (shouldn’t it be Midwest Aggression?) is a seven song outing, rife with throat-lacerated vocals, New Orleans-styled riffs, and feedback all over the place. It makes tunes like “Sobriety if Overrated” and the particularly grueling “The Fang(1)” able-bodied noise pollutants, every bit as caustic and unrefined as one would expect from a Midwestern band of this ilk.

The songs are short, the name is crass, and the sound is dirtier than the bad side of Lake Erie, making Northern Aggression one of those lovable grind outings that are hard to turn down. Now, time to erase the mental picture of a what an actual fistula looks like from the ‘ole memory banks…