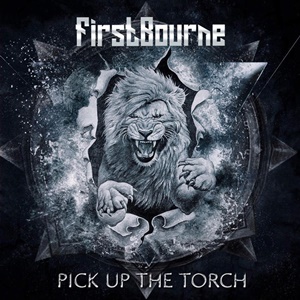 Gaining international exposure through their debut album Riot in 2016, FirstBourne from Massachusetts are a four-piece melodic power metal band with hard rock/neoclassical influences. They have won international awards for their music, also taking the opportunity to tour mainland China. Former vocalist Adrienne Cowan (Seven Spires, Winds of Plague) has stepped down due to her numerous other band/music activities – but the band moves forward, gaining a solid new singer and recording this album Pick Up the Torch. Consisting of new versions of songs from the previous album in their current lineup, plus additional new material and a closing cover – you’ll get a 16 track, almost hour-long journey into the band’s melodic sensibilities and attention to ear-catching hooks throughout.

Guitarist Mike Kerr has the heroic-style skills to dazzle and mesmerize, a seasoned player with all the right chops – but knows how to place those abilities in the proper context for a band to attain a wider array of followers than the ‘musician’ camp. Check out his tapping/ arpeggio runs against an addictive arena-like riff parade for “Control”, while his bluesy, Ozzy meets Dokken charm comes out in the more commercially accessible “Breaking Chains”. The rhythm section of bassist Ven Thangaraj and drummer Joe Bertola know how to support the songs with tact and finesse, gaining their share of nifty additions during the driving “New Tomorrow” especially during the propulsive verses. Choosing a male vocalist in Ian Raposa (Without Warning) FirstBourne has lost no edge through his multi-octave voice – equal parts AOR and metal atmosphere clearly evident in his confidence and potency. Well-suited to a ballad such as “When Morning Breaks” as much as the upbeat “For Now”, his versatility should continue to get FirstBourne recognition on a local to national/international scale – Bruce Dickinson, Russell Allen, and Todd Michael Hall of Riot are three comparisons this scribe would use to describe what Ian can do throughout the album.

The closing cover of “Rising Force” obviously pays homage to Yngwie J. Malmsteen – respectful and embracing the spirit of the man’s influence on neoclassical power metal. In the end, FirstBourne give the listeners a solid set of songs that are melodic and powerful, catchy and entertaining – bringing to mind many 80’s/early 90’s bands of the arena rock and metal realms. Although not necessarily the biggest/known style in North America currently, there are plenty of fans worldwide who can’t get enough of this – so purchase immediately if you miss that style.