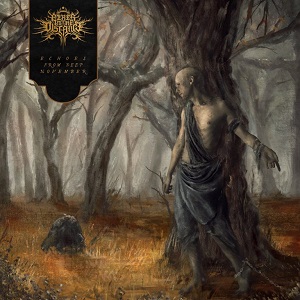 Unsigned bands take heed: Write, record and make every effort to release a professional sounding (and looking) album, then your chances of getting signed increase exponentially. Case in point, Connecticut’s Fires in the Distance, who had their Echoes from Deep November debut all ready to go earlier in 2020, only for indie stronghold Prosthetic to jump in, sign the band, then release the album on their own accord.

Fires in the Distance’s sound is comprised of Euro-dotted keys, sweeping guitar harmonies, gruff, discernable vocals and textures galore. If you want to break it down, the synth work of Yegor Savonin are often song highlights within themselves — just run through opener “The Climb” or the neo-astral vibes he gives off on “Elusive Light.” Savonin comes in handy, for these are long, sprawling songs, often enmeshed in mid-tempo-ville, which is fine, but Fires in the Distance, at times, fail to gain traction. The melodic intervals on “The Lock and the Key” are seemingly ready to burst, but get too bogged down by too elongated of an arrangement. “Reflections in the Ice” laps all sorts of Euro melo-death and Goth metal goodies and some fluent, highly memorable guitar solos, while “Chained to the Earth” bottles itself up with the same lurching tempo heard previously.

Riddle this: It is infinitely more difficult to write memorable songs in the vein Fires in the Distance are trying. Since they don’t rely on speed or extreme metal buffering, it’s a constant serve-and-volley between keys and guitar melodies on one side; steady, no-frills tempo traffic on the other. However, Echoes from Deep November never suffers from a lack of good ideas — you’ll just need to exert some patience to get to the finish line.