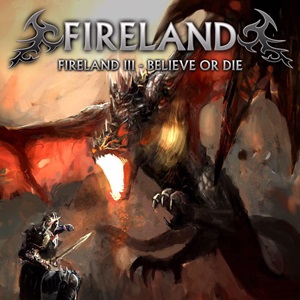 Roman numeral album titles make things so much easier to chronicle in terms of discography – as Fireland have consistently accomplished following their From the Ashes demo debut in 2004, releasing Fireland I the full-length in 2008 and the II EP follow up in 2010, available as a free download on their Bandcamp page. Six years later, the band issue Fireland III – Believe or Die, another full record that features latest singer David Brown, best known for his work in US progressive metal band Chaos Frame. Which makes the mostly Irish melodic heavy metal group more of an international outing this go-around, and in turn elevating the talent level to an even higher degree.

These 10 songs contain a sturdy framework of anthem-oriented riffs, bringing us back to an era where soaring vocals and proper guitar supplementation carried the bulk of traditional metal appeal. Guitarist/main songwriter Steve Moore shifts seamlessly between proper rhythm riffing foundations and stellar, melodic lead breaks that take the work of Rainbow, Judas Priest, and Iron Maiden to that next level – in that Queensrÿche or Iced Earth sheen for example during the restrained clean sections of “Ironclad” or the lower, semi-dark ballad “Murderhole”. The longest cut “Fallen II” appears later in the second half of the record, a majestic epic featuring thunderous double bass, an effective bass/guitar gallop, plus wider open, momentum building transitions. One of the more diverse efforts on the vocal front for David – harmonizing brilliantly in multi-octave confidence a la the best in the business from Halford and Dio to Tate and Barlow, yet with that spitfire tenacity to make you feel every word emanating in this aural landscape. More bands could take a couple of pages from Fireland’s outlook on songwriting – it’s best to keep your eyes on strong hooks and build great story-telling lyrics to create a riveting front to back experience – as the early Savatage-esque “Hate Will Live On” and circular “Believe or Die” resonate deep for all ardent heavy metal maniacs.

Fireland stir up a lot of warm feelings inside for a bygone period in the early 1990’s where there were certain traditional, power metal bands who made a minor mark on the scene but didn’t ascend the ranks as death metal overtook the underground. In other words – this is premiere metal with US power leanings, containing a lot of Lethal and Psyco Drama tendencies for obscure reference points. Hopefully we won’t have to wait six more years for a proper follow-up.