Feed Her to the Sharks – Fortitude (Victory Records) 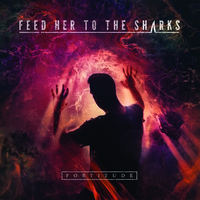 Over the years, metalcore has lost a bit of its edge. In the shift to capitalize off of Killswitch Engage’s winning formula of melodic vocals and heavy riffs, many bands surfaced that took things too far in the melodic direction and lost sight of the initial intensity. Australia’s Feed Her to the Sharks on the other hand, appear to have traveled back from that early 2000s period with their snarl intact. It’s just they’re a little too late for the party with their third release (and first for Victory), Fortitude.

Borrowing from a template that helped cement bands like Killswitch Engage, All That Remains, and It Dies Today, Feed Her to the Sharks keeps the music riff-oriented (as opposed to relying solely on clean vocals and/or incessant breakdowns). Opening track “The World is Yours” holds no punches and quickly establishes the tempo with a driving riff and some screamed/growled vocals. Of course, when the clean vocals kick in, things drop down a bit, but on the whole there is some consistent intensity throughout. Unfortunately, once you’ve heard “The World is Yours,” the remainder of the album follows the same pattern but doesn’t hit as hard. On the plus side, there are some solid solos and leads, but there’s a stronger emphasis on clean vocals on a few tracks and some electronic permutations (albeit nothing too invasive) sneak into the mix. It’s not until the more emotive closer, “Let Go,” that anything really resonates with the listener after it ends.

In an examination of other ‘core bands still out and doing their thing, Feed Her to the Sharks does keep things somewhat heavier than their compatriots. It’s just disappointing that most of the tracks are so derivative of each other as it seems their approach to the material does show that there’s at least a little bit of gas still in the metalcore tank if used effectively.