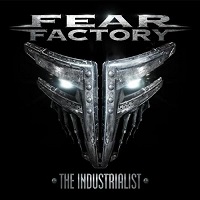 Admittedly, Fear Factory probably went too extreme on 2010’sMechanize. They’re not going to top that one in terms of sheer brutality, especially in the hyper-staccato department where guitarist Dino Cazares and now-ex drummer Gene Hoglan locked up in perfect unison. The Industrialistbacks away from some of that, and it doesn’t do a very good job of finding variety or separation between the album’s ten tracks. Rather, this is probably how Cazares and Burton C. Bell always envisioned the band: sterile, lifeless, and very much machine-like.

Lots of initial gripes over the usage of programmed drums, although they’re awfully human-sounding. One can ponder the difference someone like Hoglan or even former FF drummer Raymond Herrera would have made, yet the groove-driven nature of The Industrialist dictates that the elaborate drumwork of a Hoglan and to a lesser extent, Herrera, isn’t entirely necessary. In any event, the programmed drums here could be a prime indicator of where Fear Factory will be headed for future releases…more machine, less man.

Cazares hasn’t exactly extended the reach of his riff selection on tried-and-true numbers like the title track, lead single “Recharger” and “Depraved Mind Murder.” Yet, these songs operate with such precision that it’s easy to fall in line. Bell (who created quite the concept regarding advancements in the industrial age leading to the creation of the album’s protagonist, The Industrialist) has his moments, particularly on “New Messiah,” where his patented clean vocals take form, and on “Disassemble,” a song that connects with 1998’s marvelous Obsolete. The only bum track here is album closer “Human Augmentation,” which is an uninteresting atmospheric outro.

Its resemblance in uniformity to 2004’s Archetype effectively thrusts The Industrialist downward in the Fear Factory catalog. There’s no real standout moment here; just a conjoined batch of songs that while certainly vintage Fear Factory, pack far less of a punch than its predecessor. However, it shredsDigimortal and Transgression, so there’s your takeaway.