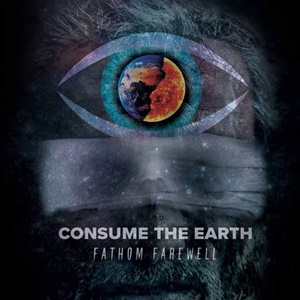 Admittedly critical of anything coming across in bio sheets/ background info for promos with the ‘metalcore’ tag, sometimes you just press onward to judge every effort on its own merit. Case in point – Fathom Farewell from Boston and this latest six-song EP Consume the Earth. Since forming in 2014, they’ve gained prime opportunity to impress across live stages and festival audiences, performing the Vans Warped tour locally in Massachusetts as well as open for Sevendust and make Rock and Shock/ New England Metal and Hardcore festival appearances. Their previous EP Decomposition came out in 2017, and based on a few passes it’s evident that this band possess a great cross-pollination of modern / melodic hard rock and metalcore influences which keep the focus on strong performances and memorable individual songs above necessarily subscribing to specific trademarks of the genres at hand.

The immediate impact and versatile clean to scream ability from vocalist Alex Cohen pushes Fathom Farewell out above the hordes – the man has some serious pipes ready for the challenge, forceful and commanding while confidently holding out key notes during the verses and choruses to make “Six Feet Beneath” and “Wide Awake” instant appealers. He’s able to compliment the groove-oriented guitar sequences of Gage Killion to increase the retention/ bounce factor for listeners, allowing his lead breaks or low-tuned switch-ups to gain even more crushing impact. The band musically can traverse modern hard rock/post-grunge movements through one song, then obliterate in a Lamb of God/As I Lay Dying wat the next as the brutal “Mutiny” illustrates, some of the quick hitting musical interplay quite progressive against the relatively normal chorus. There are obvious spots of ‘breakdown’ proportions, but Fathom Farewell execute them appropriately in the context of the song to keep the arrangement flowing in the right direction. This quartet have taken a lot of their influences from the 90’s/early 2000’s heavy rock scene (Alice in Chains, Linkin Park, Breaking Benjamin), thrown a bit of that Warped/modern metalcore angst and rebellious nature plus some Dream Theater/A Perfect Circle twists, and created a sound that has musical validity and catchiness, a rare combination.

The lyrical content tackles humanity and the grave consequences we cause to the world around us- the production values striking the head and heart as if gaining a clear picture of what you would take in live. Those who dig heavy music with strong rhythmic hooks, clever riffing and magnificent melodies on the vocal front will need Fathom Farewell in their collections.