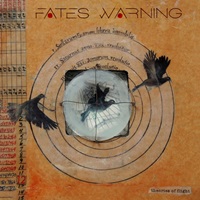 If assembling a Mount Rushmore of legends in the progressive metal field, Fates Warning deserve a spot alongside Dream Theater for their contribution through benchmark records like Awaken the Guardian, Perfect Symmetry and their most commercially successful platter Parallels. Debate abounds regarding the staying power and stylistic shifts the group has taken in the 2000’s (can’t say the often atmospheric, more modern Disconnected really ‘connected’ for this scribe, while FWX fared a touch better), but their last studio album 2013’s Darkness in a Different Light righted the band’s ship, elevating anticipation over this 12th studio album Theories of Flight.

Tackling mature subject matter of deliberate direction change in personal life choices while looking at transience, disconnection, and the quest for solid ground, Ray Alder thoughtfully constructs his words and melodies with grace, clarity, and conviction – “Like Stars Our Eyes Have Seen” and “From the Rooftops” two songs that will hit the headspace as well as the heart for all Fates Warning fans. The aforementioned “From the Rooftops” opens in a restrained manner, a semi-atmospheric/bluesy refrain while tasteful, sparse lead work and Alder’s softer, low delivery keeps you aurally guessing – the last 2/3 of the song featuring crazy bass/guitar/drum maneuvers where Joey Vera, Jim Matheos, and Bobby Jarzombek push and pull against the heavier syncopation and time signature/part juggling.

Smartly spreading out the two ten-minute epics at the midway and near conclusion points, the band understands that they can be just as adventurous in a more compact, radio-oriented format a la Rush. “Seven Stars” for instance contains that requisite catchy guitar refrain during the verses while the chorus is pure gold – one easily replicated for audience sing-a-longs when aired live, and “White Flag” has a little bit of that darker, low-tuned feel that keeps the band leaning to current times as the instrumental sections give the rhythm section another mesmerizing, technical prowess master workout. The latter also features guest solo appearances from Frank Aresti and touring guitarist Michael Abdow – as Jim Matheos knows his playing/songwriting strengths and seeks out the right supplementary shred/fluidity work when called for.

For my money you can’t beat the epics “The Light and Shade of Things” and “The Ghost of Home”. Matheos’ maturity as a songwriter takes you on a journey not soon forgotten with both cuts, exemplifying their premiere status in the genre as progressive musicians. The quartet key in on the freeform aspects, yin and yang softer to louder segments and pushing parameters necessary to excite, yet not forsaking hooks and melody parts for the continuity of each track. The only bummer about the record is actually the concluding four-minute title cut – very atmospheric with Pink Floyd-esque narrative elements, it screams ‘filler’ or could have been better served if chopped in half (despite a potent bass/drum groove movement during 1:47-2:18).

Easily 5-6 songs could gain a place in live sets in support of Theories of Flight – probably the best record for Fates Warning since A Pleasant Shade of Gray. Refreshing to hear these legends deliver the goods once again this deep into an illustrious career.