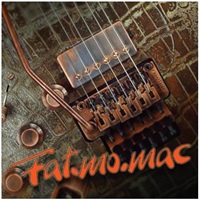 Considering Candlemass’ status as purely a live, non-recording entity, it makes sense that the members would seek out ways to flex their creative muscles in other formats. Guitarist Lars Johansson felt the need to reach back into the inspiration well to develop Fat.Mo.Mac (named after one of the largest Alps of Northern Sweden, Fatmomakke), a very blues-inspired effort that showcases songwriting of a retro 60’s/70’s variety. Joining him in this early roots quest is ex-Therion/current Candlemass vocalist Mats Levén and a host of Scandinavian friends, some within as well as outside the metal industry.

The 9 songs run the gamut from straight ahead blues affairs where Lars takes on the working class slide bar guitar for “Always Like That” which would make Jimi Hendrix and Stevie Ray Vaughan beam from the heavens to heavier material like the opener “Walk Alone” that has this up-tempo, classic hard rock boogie feel and allows Mats a chance to stretch his world class pipes in the chorus. An interesting instrumental “Kickback” appears in the middle- it has this slinky template that could easily have been an early Candlemass track – if only taken through a Leslie West meets Gary Moore blender. Add in the plain guitar cover art and you’ll understand quickly that minimalism takes precedence over layers of sound and technological disguises.

Metal started from the fusion of the blues and rock music – adding in the power of a Marshall amplifier and its distortion to maximize the hair raising propensity. This self-titled record is a testament to a time when musicians would explore their influence bank – jam on ideas – and see wherever the road map would take them. Be aware that this is not metal in the slightest, very bluesy, yet heavy in its own right, and Fat.Mo.Mac can sweep your troubles away.