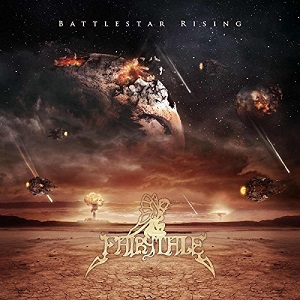 Straight heavy metal with loads of deadpan humor from Germany… no folks, we aren’t taking in the latest Helloween album. It’s the third record Battlestar Rising from Fairytale, a new band to these ears despite activity dating back to 2000 and two previous, self-financed albums in Book of Fairytales and Rise of the Twilight Lord. Cue the marching tempo strains, mead-hall background vocal support, plus riffs worthy of steel-driven status – melody being a key concept to retain song to song appeal for the five-piece.

Stylistically you have quite a mixture of mid-tempo to slightly faster offerings that see-saw between Teutonic power/classic elements and occasional forays into the Bay Area 80’s scene – as if Fairytale like to incorporate everything from twin guitar Helloween harmonies during “Viper Pilots” to early Iced Earth meets Rage on the title cut. Occasional vocal melodies during the verses of “Cain” mirror familiar ground, nicking “Wasted Years” from Iron Maiden although singer Carsten Hille glides up and down while holding certain notes more in a Tate than Dickinson vein. You sense synchronized stage moves through specific refrains and transitions from Colin Brinker and Stefan Klempnauer – studying a lot of NWOBHM and Accept tricks of the trade for the cultural hooks during “Man or Machine”, while the calmer, layered guitar measures take “The Opera House” to memorable, dark ballad proportions.

Fantasy, history, and sci-fi comprise most of Fairtale’s lyrical themes – and Carsten’s obvious soaring proclivities tempered with standard mid-range passages designated for audience collaboration bring the efforts of the band a touch higher than most. The weakest point of the record lies in certain basic drum pattern choices – they sit a touch behind the riffing (check out “Colony (The Final Battle)” in this regard) which makes things disjointed against the crunchy and harmonic rhythms and lead breaks. Battlestar Rising lives in the hearts of Frost and Fire or Keep It True festival attendees – proud to scream, fighting the world as they go balls to the wall for the power and glory of heavy metal.