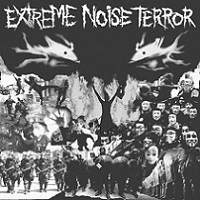 Because they were both spawned from the same rabid, groundbreaking, and downright dirty UK punk/extreme metal scene, Extreme Noise Terror and Napalm Death have often been a regular comparison point for one another. Now, there’s no disputing how much more popular Napalm Death is (that’s quite obvious), yet over in the UK and in Europe, Extreme Noise Terror have a much-warranted reputation for being able to push the heavy grind envelope with the best of ’em. The passing of long-time vocalist Phil Vane in 2011 may have put a quick damper into the band’s plans, but former The Rotted throat Ben McCrow fills Vane’s shoes dutifully, if not admirably.

This self-titled effort is the band’s seventh album overall, and first for the always-dependable Willowtip. (It’s also their first album in seven years, mind you.) Relying on the punishing, fiery blast-grind tangents that are a staple of the UK scene, Extreme Noise Terror spares no time in pushing ahead on brief, but impactful numbers like “Dogma, Intolerance, Control” as well as the frenzied “Think Outside the Box.” McCrow, as expected given his previous work, turns in a scathing performance, his larynx-pummelling voice adept at handling the quick, in-and-out numbers, as well as the more realized, such as “Cruel and Unusual Punishment,” which could be the album’s best cut.

Above else, at 30 years in the game (the band was originally formed as Raw Noise), Extreme Noise Terror, like their contemporaries in Napalm Death, prove that extreme grind has yet to establish a cutting off point in terms of age. It’s not totally a young man’s game quite yet, and the seasoned, worldly (if you will) attack of the band’s self-titled effort shows that in spite of the occasional member change, layoff between albums, and passing of a valued frontman, Extreme Noise Terror are more than capable of soldiering on in respectable fashion.