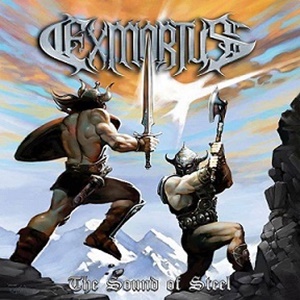 Changes abound in the Exmortus camp these days as album five The Sound of Steel comes out. Long-time members David Rivera and Mario Moreno do not appear on this record – so guitarist/vocalist Jardan ‘Conan’ Gonzalez and bassist Phillip Nuñez recruit Warbringer members Carlos Cruz and Chase Becker to fill the drum/second guitar roles, as speculation abounds on their status in the band (session guys or permanent members?). In the end, it’s all about executing the technical melodic thrash/death mastery that Exmortus has been delivering consistently record to record – especially making headway through their previous two platters 2014’s Slave to the Sword and 2016’s Ride Forth.

Rest easy Exmortus followers – the quartet know what their fans desire, and while these ten tracks may dial into more of a melodic comfort level at times, they know how to keep jaws agape through fluid runs and bursts of neoclassical turned metal madness. It’s obvious during the instrumental sections of tracks like “To the Ends of the Earth” and “Riders of Doom” that these guys can develop intricacies and dive bomb mechanics that set them apart from the average metal player – using theory and arpeggio angles rarely delivered in this context convincingly. You’ll get the normal crunchy heads down thrash material with “Feast of Flesh” where Conan can unleash a flurry of notes at will and heads/bodies assail against each other to the rhythms, but there’s also the more controlled mid-tempo action that seeks out more traditional/power avenues, where Metallica may meet Iron Maiden on the follow-up “Into the Maw of Hell”.

Conan also likes to include his metal interpretation of a classical piece, which you hear for “A Minor Instrumental” where the layers of guitar harmonies, tricks, and shifts can appeal to both ardent followers of the genre and classical composers alike. The work of Cruz and Becker does lend itself to a traditional/thrash angle – and it’s nice to hear a soaring clean vocal sit side to side with Conan’s gruff main delivery on the magnificent “Strength and Honor”, the chanting aspect sure to be played up should this make the grade in future Exmortus sets. Another poster worthy Phil Lawvere cover enhances another killer Exmortus platter – so even with the lineup shifts, The Sound of Steel continues to keep the band plugging along as one of the best in the new breed of neoclassical thrash/death.