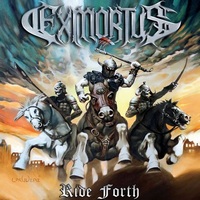 Road dogs during the past two years in support of their excellent third album Slave to the Sword (personally witnessing stunning shows with Dark Tranquillity, Omnium Gatherum, and Lich King a few times), California’s Exmortus advanced their neo-classical oriented thrash/death profile to a wide swath of the metal masses. Seizing the proverbially iron while molten hot, Ride Forth contains 9 more tracks that prove musicianship still matters in the genre – condensing ideas into traditional hooks and tempos while stunning your eardrums through successive and consistent playbacks.

Sharpening your style through hundreds of live shows, Exmortus seem to have even more of a team mentality when it comes to their songwriting approach and overall performances. You’ll get plenty of ascending and descending arpeggio-oriented maneuvers and killer drum fills courtesy of Mario Moreno which keeps “Hymn of Hate” relevant, but Ride Forth elevates the band to new horizons through more of its anthem-oriented build ups and mid-tempo riff passages that take “Let Us Roam” and its successor “Black Sails” to possible Maiden/Priest legacy heights for the current generation. Keeping the proceedings at a tidy 44 minutes should be a benchmark others take into consideration. Less can indeed be more in terms of spaced repetition and retention when taking in tales of shielded knights that battle for honor and glory.