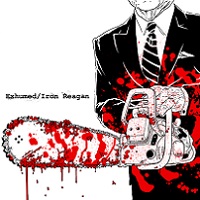 Split releases seem to be all the rage lately, especially through Tankcrimes.  One has to wonder though, how the combination of a death/grind band such as Exhumed matches up against a crossover hardcore band like Iron Reagan and create something that gels.  Surprisingly, it’s less jarring than one would expect, even though it comes across as a bit uninspired (note the lack of title, which is out of line for recent Tankcrimes split releases).

Exhumed starts things off in the usual fashion, coming off the excellent, recently released Necrocracy.  The first two tracks fall right in line with anything from said album, though there is a slight edge of punk feel to them, of which “Gravewalker” stands as the stronger track, with a wicked solo towards the end.  The final two tracks are covers of Minor Threat’s “Seeing Red” and Negative Approach’s “Ready to Fight,” which ease the transition from Exhumed to the coming Iron Reagan portion of the split.  There’s nothing particularly “must listen” about either track, unless you’re a die-hard Exhumed fan.

Iron Reagan, whose members hail from Municipal Waste and Darkest Hour, contribute four incredibly short slabs of thrashy hardcore that you might miss if you blink.  The longest track here, “Mini Lights,” is 1:33!  They do provide one of the more giggle-inducing song titles of 2014 so far with “Holy Water Makes Me Wet” but other than that nothing really stands out from the pack.  All four songs aggressively thrash through to the end, but fail to really leave a lasting impression.

At 11 and a half minutes, the Exhumed/Iron Reagan split is a hard sell.  With only one standout track (the aforementioned “Gravewalker”), most of the material here caters directly to the hardcore fanatics that need to have every single song each band has recorded.  If that doesn’t apply to you, it’s probably safe to sit this one out.