When you think of metal geographically, Indonesia probably isn’t your first choice of heavy metal hotbeds.  Alas, enter Exhumation, formed in 2008, who make the case that death metal is alive and well in the Asian islands.  Originally issued in 2012, their debut album Hymn to Your God is seeing a current reissue and new lease on life courtesy of Dunkelheit Produktion.

The sound of Exhumation doesn’t bear much off of the beaten path for retro-flavored death metal.  Fans of Morbid Angel and Vader are sure to catch more than a few passing similarities to the band, for better or worse.  For Exhumation’s benefit however, despite the similarities, there’s a certain enthusiasm for the material on display here that catches fire, and their songwriting proficiency keeps things from becoming too mundane.  Not to mention a running time that’s just shy of 30 minutes, which keeps them from overstaying their welcome.

The riffing hits hard and fast, and it’s backed up by a solid production job.  The guitars have an evil flair to their sound, and everything sounds clear without resorting to a sterile sound that robs the band of their power.  Frequent blasting and machine gun riffing is the name of the game here most of the time, but there are a number of standout solos that grab the listener’s attention, such as “Dominion” and “The Apotheosis.” They even provide a nice ambient piece that feels more unique and Asian-influenced with the brief title-track, including some female vocals before ending the disc with a crushing cover of Blasphemy’s “Ritual.”

While the Vader-styled gruff barks do tend to get a bit monotonous by the end of the album, all of the other parts of Exhumation are hitting all the right notes for death metal success.  Even if it’s a bit familiar, it’s nice to hear some well-executed material from places we don’t associate too much with death metal. 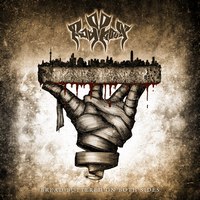