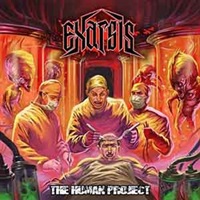 For a country better known in the epic/power metal circles, Greece currently has an equally potent thrash revival thanks to the label and touring profile of acts like Bio-Cancer – and to a larger degree Suicidal Angels. Athens-based quintet Exarsis since 2009 are actively throwing their name in the speedy game, releasing a demo and two previous albums prior to their latest full-length The Human Project. Previously privy to 2013’s The Brutal State (and receiving a so-so response through these ears), one hopes the band make slight upticks in the originality and performance department to escape the ‘cut and paste’ influence grab bag many of these younger acts choose to employ.

The songs certainly gravitate towards the second Bay Area thrash wave meets New York’s Nuclear Assault in terms of the general attack, gang background vocals, and uppity nature of the tempos along with the requisite ‘mosh’ type transitions. Exodus and Vio-lence factor huge in the riff crunch, gallops, and stop/start maneuvers from guitarists Panayiotis Tsitsis and Kostis Foukarakis – check out the schizophrenic “Abnormal Generation” and “False Flag Attack”, and keep the general proceedings heavy for incessant headbanging. Occasional narrative soundbites and phone calls offer dynamic interludes for the electric action, and there are times when the rhythm section can serve up a decent groove (the opening sequence of “Skull and Bones” most notably), but for the most part Exarsis live for that up-tempo adrenalized template – serving up 3-5 minute salvos that wrench every bead of sweat out of your system.

And then there’s vocalist Nick J. Tragakis – a thrash vocalist who gives new meaning to ‘vo-kill-ist’. His shrieking and shrill, screaming nature first appears 51 seconds into “Arrivals”, and gives new meaning to the term ‘make or break’ for full band appeal. Trying to be John Cyriis from Agent Steel but sounding like a deflated helium montage of John Connelly meets Sean Killian (Nuclear Assault and Vio-lence singers respectively), his phrasing and note sustaining tendencies render otherwise adequate songs such as “Medicide” and “Change of Plans” into nails on the chalkboard pain outings.

A beefier production notwithstanding, The Human Project puts Exarsis in that small window of appeal to probably listeners who care more about the music and less about the person behind the microphone. Count me out of that camp.