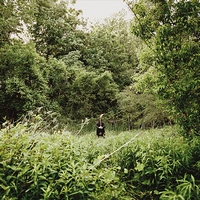 Typical of Canadian metal – you never know what you’re going to get. In the case of Kitchener, Ontario’s Exalt, the results on their Pale Light sophomore outing aren’t as mixed as they are too much in tune with the rest of crusted hardcore metal front. Then again, there are a few moments across the album’s 11-song running order where the Canucks appear to be interested in exiting stage left from the played-out, tiring, and generic d-beat assault that has ravaged this little sub-genre. In essence, when the band gets down and romps with groove and chugs, they’re on fire.

Lots ‘o traditional/familiar frenzied cuts here, the most obvious being opener “Death is a Road” and “Deafen,” a song littered with dis-harmonic guitar work and Tyler Brand’s relentless vocals, of which become monotonous towards the album’s tail-end, more than likely a result of having one too many tattooed dudes get down with a similar approach: Bark until your head falls off, then repeat. Meh. Still, the deep-rooted grooves and tempered tempo portions of the album have no problem clicking, like on the excellent “Greying” or the variation found on “Flesh to Ash,” a song that contains the album’s most imaginative guitar work. Album closer “Fear is the Hand” also supplements the band’s case for more noise/feedback-based avenues.

Teetering somewhat too close to the brink of being yet another generic, imagination-deprived crust-core album, Pale Light gets by because of Exalt’s total brashness and reckless approach. However, there’s too many bland commonalities here to give these fine gents anything more than a casual thumbs-up, something that can be worked out with some good ‘ole fashioned touring and being perpetually broke. Those kind of things usually cultivate even more rage.