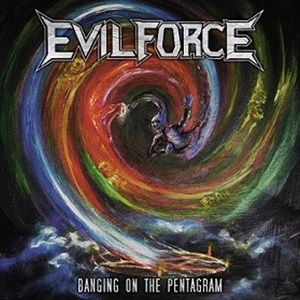 Landlocked between Argentina, Brazil, and Bolivia is the South American country Paraguay – home to the following thrash band Evil Force. Active for 12 years, they’ve put out a steady swath of demos, EP’s and split releases outside of their 2014 Ancient Spores full-length. Tugging at the underworld through the metal title alone, Banging on the Pentagram contains eight raw cuts of abrasive, no holds barred speed that live for those early, pissed off youthful angst days of the movement.

Safe to say that the quintet hold in high regard the early Canadian speed/thrash scene through the discographies of Exciter, Razor, and Sacrifice – blitzkrieg riffing, rolling tom action, and pounding bass/ drums along with shrieking vocals and unison chorus shouting make for quite a rollicking affair on “Southern Armageddon” and “Toxic Warfare”. The brief transitions make high intensity interval training seem tame by comparison, as Fernando Steel Force rages in his banshee wail / sadistic scream template let on the loose. An unusual closing move is the lengthy instrumental “Offering to Horus” – at 9:39 the arrangement showcases the more advanced skills of their guitarists, from tasteful acoustics to Egyptian-oriented, doom-like electric riffing, plus a bass solo in the mix beyond the faster riffs and twin rhythms that would make Iron Maiden and Metallica grin in devil’s horns approval.

Boiling things down to the essence of Evil Force, these tracks will remind many of that 1983-1986 era of thrash, where the vocals could be rough and tumble, the tempos ready to tear off the rails, and the lead breaks straddled the melodic/ripping see-saw element. Expanding on a lot of those twin guitar lines that make “Devastation Time” and the aforementioned instrumental standouts would be wise for future creative longevity. Banging on the Pentagram provides ample bang for the buck, summoning the darkness while sweat profusely pours out head to toe.