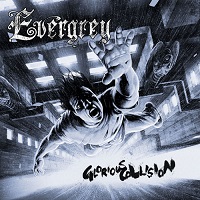 This scribe was of the belief Evergrey were going to be massive, or at least an upper-tier band. Of course, this was back when albums like In Search of Truth and Recreation Day were beaming lights in the progressive metal scene. The Swedes grew to loathe the progressive metal tag, which in turn, resulted in total clunkers that were The Inner Circle and the commercialMonday Morning Apocalypse. 2008’s Torn partially righted the ship, but after a lineup switch that saw 3/5’s of the band depart, Evergrey is back on the right track with Glorious Collision.

Forgoing the technical element they used to be lauded for, Evergrey are keeping things in tight, with simple, but direct and dynamic songs. Mainman Tom Englund is his usual tender and unique self (no one sounds like the towering Swede), resulting in a handful of soft moments during “…and the Distance” and the punchy “You.” There’s still an onus on choruses, something Englund still regularly excels at, as evidenced by “Leave It Behind” and “Restoring the Loss.”

Good to see the Swedes taking some chances in the extreme metal realm during the opening of “Frozen,” where a surprise blast-beat pops out. On the opposite end of the spectrum, “To Fit the Mold” and album highlight “The Phantom Letters” are welcome returns to the soft balladry that made old jams like “I’m Sorry” and “Madness Caught Another Victim” such bonafide winners.

A classic case of a band that shot itself in the foot too many times to fully blossom (read: the aforementioned Monday Morning Apocalypse), Evergrey is making successful inroads to returning to the top of the dark metal heap. The progressive tag is not something the band is even toying with it; Glorious Collision is a stout, heady, and well-executed album that proves Evergrey are a force to be reckoned with once again. Don’t go fucking it up like you did before, ok?