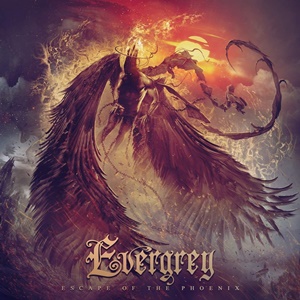 Over the past twenty plus years, one of the most memorable and satisfying melodic power/progressive metal acts to release music has to be Evergrey. Writing touching songs that reach people on multiple levels of emotion and cathartic connection, they’ve learned to take their sound into dynamic pastures – committing to a deeper knowledge and understanding of the tools at their disposal. In looking back at their long discography, they’ve moved from a heavy foundation with The Dark Discovery debut into more commercial waters for Monday Morning Apocalypse, but over the course of their last few records found a comfortable songwriting groove that touches on all facets from heaviness to mid-tempo numbers, along with poignant ballad work that reaches deep into the heart and soul.

What does this mean going into Escape of the Phoenix? Well, more of the same versatility and professionalism you’ve come to know and love from the band. The opening triad of songs illustrates every angle the quintet aims to execute. Containing the subtle nuances of low-tuned rhythm guitar brutality and semi-djent groove during “Forever Outsider”, the breathing room of spacey keyboards and interstellar bass accents for the undeniably mid-tempo catchy “Where August Mourn”, and the slow building epic ballad that features mesmerizing vocals from the verses to the chorus for “Stories” that contains the equally edge of seat contrasts between softness and loudness, as well as some thoughtful, careful lead break work. Highlights are numerous and changing daily – the thunderous chug against the progressive double bass / snare hits during “A Dandelion Cypher”, the churning guitar/bass syncopation and symphonic/choir-like embellishment during the title track, and serene setting of soothing Englund-led vocals against ivory keyboard placement before “You from You” kicks in full band style as another inspired ballad of a different mold.

Garnering a special guest like James LaBrie of Dream Theater for some vocal support on “The Beholder”, Evergrey places these musicians in the best possible situations for additional color – his mysteriousness weaving in and out as well as harmonizing with Tom to aural ecstasy. What’s most impressive about Evergrey in 2021 is the adherence to captivating, distinctive songs track to track – often allowing space for quietness or one/two instruments to carry a specific part before the unifying team comes into focus. Production/engineering duties are split between vocalist/guitarist Tom Englund, drummer Jonas Ekdahl and the veteran Jacob Hansen – once again ensuring a sound that is full, crisp, yet heavy to capture all the melodies, hooks, harmonies and contrasts that make this band so special.

Eleven songs in just under one hour, yet you never feel fatigued or bored because Escape of the Phoenix contains what everyone loves and needs in Evergrey. Newcomers would be wise to start here and work your way through the back catalog – long-timers have already been praising this record since the singles started hitting the internet early in the year. Not many bands usually continue to take your breath away in heavy metal with their twelfth studio record – but then again there is only one Evergrey.