Evergrey – A Decade And A Half (SPV Records) 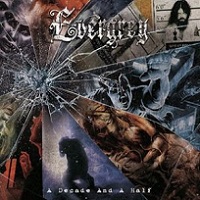 Evergrey always hated the progressive metal tag. They hated it so much that during this scribe’s stint at InsideOut Music in the mid-00’s, the band formally requested that any mention of progressive metal be omitted from their bio. So as much as the Swedes wanted to get out of the progressive metal box (see 2006’s disastrous Monday Morning Apocalypse), they’ve never been able to elude their past. Yet Tom Englund and the boys are smarter than we give them credit for, having fully re-embraced their roots on 2008’s Torn and last year’s excellent Glorious Collision, two albums that help pad the tracklisting for the aptly-titled career retrospective, A Decade And A Half.

A rather hefty 24-track collection, A Decade And A Half covers the band’s entire discography, all the way to back to their Dark Discovery debut. The collection doesn’t go in chronological order, so spurts from all eras of the band are leaned upon, most notably the hard-to-touch In Search of Truth (2001) and Recreation Day (2003) stretch where Evergrey were arguably at their peak. We won’t list all the tracks, but jams like “The Masterplan,” “Rulers of the Mind,” “Blinded,” and “Recreation Day” are head and shoulders above anything the Swedes ever did, and are rightfully included in the set.

The dud that was Monday Morning Apocalypse only gets two cuts (the title track and “Still In the Water”) while the recent Torn and Glorious Collision are strongly represented, with highlights being “Frozen,” “Wrong,” “These Scars,” and “Broken Wings.” Also of note is the band’s early numbers like “Solitude Within,” “Blackened Dawn,” and “Words Mean Nothing,” each of which showcase Evergrey’s previous infatuation with long, elaborate song

structures, all benefiting the soothing vocal style of Englund.

Certainly a worthwhile overview of Evergrey’s career, A Decade And A Half is an all-encompassing glance at a career that has seen its share of triumphs and bumps in the road. To many, the Swedes were just this close in terms of taking the next step into becoming an upper-echelon band around Recreation Day and 2004’s The Inner Circle. With A Decade And A Half, it’s easy to see where the band went wrong and eventually, got back on course.