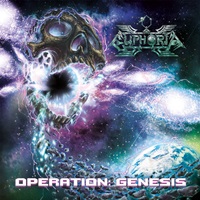 The Motor City Detroit, Michigan houses an active music scene – so it shouldn’t be surprising that the metal genre can produce worthwhile talent here as well. Combing the internet in my late night research Euphoria appears, as Operation: Genesis is the group’s first full-length in their career, an idea originating in 2012 that finally came to fruition at the beginning of this year. After an intro that features a doomy buildup, the traditional/cultural guitar hook mid-way through could galvanize many live showgoers – giving way to opener “Theoretical Conception” where a number of NWOBHM meet power/thrash musical hooks and stop/start changes take place within the first minute, providing eargasmic anticipation at the aural activities on display.

Euphoria excel at revving up the axe action while drummer Louie Badalament and bassist George Ford keep up with the sick stair step riff stacks guitarists Eric Lemmon and Bubba Colonna IV unfurl. You can’t help but want to simulate the octane work within “Primordial Dominance” or the under three-minute explosive “Aftershock the Art of War”. The back half of the record has more of their epic songs (if you can call 5:25-7:11 efforts truly ‘epic’), where the band explores some of their darker death or progressive nuances – “Black Dawn” working very well as the raspy death screams and semi-growls from Justin Kelter provide that extra element of tension as Bubba delivers a melodic meets semi-shred break that fans of Alex Skolnick or the great interplay of all the Forbidden guitarists excel at.

It’s difficult to encapsulate all of the subsets Euphoria employ in their progressive thrash sound – as aspects of punk, NWOBHM, and death also factor into the equation, all dependent on the needs of the song at hand. Overall though a strong appreciation for the late 80’s/ early 90’s thrash scene seems to be most evident, when bands like Forbidden, Death Angel, Dark Angel, and Testament ruled – along with slight affinity for possibly Teutonic thrash or death in terms of the vocal delivery (think Destruction meets Death). In the end, Operation: Genesis crushes because of its strong attention to musicianship, hooks, and shifting versatility from song to song – hopefully helping the band reach a wider, ardent fan base who seek to support the best the genre has to offer.

Euphoria will be a name that rises in the ranks if they can deliver on stage as impressively as on this recording.