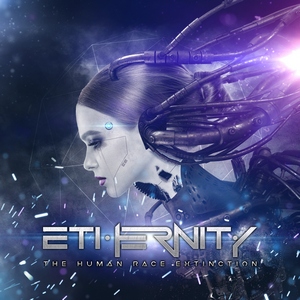 A band that has taken the time to truly develop before spreading their wings for global conquest, Ethernity have been plugging along for well over a decade. Over the course of two full-lengths (starting with 2006’s The Journey) and an EP, they’ve invested themselves in nurturing something that doesn’t immediately come off as ‘yet another power metal album.’ Full of nuance and grandiose playing across the board, The Human Race Extinction is bound to turn some heads in the melodic metal community.

There’s a broad spectrum of influences that make their way into Ethernity’s sound. Given the space-y look of the cover art, there’s little surprise when you hear the heavier crunch of a band such as Scar Symmetry when it comes to the riffing and dominant keyboards. Other references points such as Evergrey or Symphony X come to mind as the darker, gargantuan riffing swings into high gear on songs like “Rise of Droids” and “Mechanical Life.” Flashy leads and solos (even some on the keyboard end) provide some wow factor without going too far into indulgent prog and frequently are a highlight. Bouncy, synth-driven progressive/power metal (think somewhere on the modern side of the genre) gives them more of an edge to garner some new fans, and despite the crunchy approach, there’s some immediacy to the material as well. Vocalist Julie Colin isn’t afraid to transcend some boundaries either. With a somewhat raspy and powerful voice, she meshes nicely with the thundering riffage that often accompanies her (even on the slightly more melodic “Warmth of Hope”) while still providing something that’s pretty accessible in tone. For what it’s worth, at a daunting 70-minutes in length, the album doesn’t waiver in quality, a definite nod to their songwriting chops.

The Human Race Extinction is an effective call to arms from Ethernity. Utilizing the heavier, near-melodeath tone to their power metal and unique female vocals, it’s more fresh-sounding than you might expect. Qualities that are certain to make Ethernity a quickly rising act with proper word of mouth.