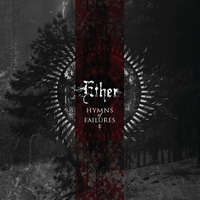 Considering the last Ether album went under the title of Depraved…Restless…Feelings (it might have worked better with the ellipses), Hymns of Failure sounds slightly more optimistic. Then again, this is blisteringly fast Canadian black metal we’re dealing with, which is untapped ground. Hymns of Failure happens to be the band’s first album in eight years, thus reentering the scene at the proper time when black metal has more acceptance than ever before. And to Ether’s credit (the band is actually the one-man project of Scythrawl), Hymns of Failure is top to bottom, a frenzied listen.

The blast-happy approach of the album’s first two cuts, “Failure” and “Enmity” pave the way for the album’s prime number, “Coldness.” Evoking the beyond-dreary set of BM the likes of Shining (the Swedish version) and Vanhelga are well-known for, Scyhrawl weaves clean vocals, spoken-word lines, and his patented throat-bombs into a mesmeric 14-minute song that perfectly encapsulates what the band does best. The side-winding chord structures on hand usually follow some melodic scrawl, which they do here, and when combined with over-the-top blast beats, and the song becomes a climatic, epic-of-epics. The ensuing number, “Emptiness” is even longer, bulging with similar moments of extremity and depressive guitar work, while album closer “Isolation” comes in at over 23 minutes, and boasts more clean vocals that recall prime-era Woods of Ypres, who are by no means a comparable band, but at least they are on this particular song.

Heaving with ideas and brash intensity and restraint at once, Hymns of Failure is a mini-triumph for Canadian black metal, who really haven’t done much of a job at produce a stable of bands worth rallying around. Ether, in spite of their relative inactivity, lack of popularity (their Facebook page is lacking in likes, which in the black metal world, might not be a bad thing), and geographical location, are a brazen force. An early 2015 black metal sleeper.