Eternal Champion – The Armor of Ire (No Remorse Records) 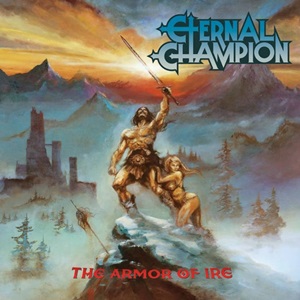 Epic metal started back in the 1970’s and early 1980’s through the work of Rainbow and Black Sabbath in classic songs like “Stargazer”, “Heaven and Hell”, and “The Sign of the Southern Cross”. But to many, the style gaining underground credibility through the discographies of Cirith Ungol and Manilla Road. History lesson aside, this type of fantasy/true metal with grandiose, hypnotic hooks on the vocal and musical front plus a driving underpinning (doom one minute, more power oriented the next) is what Texas band Eternal Champion deliver on The Armor of Ire, the band’s first full-length. Getting a single, demo and split release with Gatekeeper under their belts since forming in 2012, the Michael Moorcock references shine beyond band name and serve as a fitting platform for call to arms lyrical content that matches up with the thunderous, marching tempos and equally engaging guitar harmony layers.

The axe action has a galloping charge for sure, allowing for some killer lead moments that contain thematic relation to the arrangement on hand – rather than being wank-fest shredding to showcase individual abilities. Check out the closing moments of “The Cold Sword”, or the clean quieter interplay during the verses on the follow up “Invoker” – stuff that would make Mark Shelton and Tony Iommi very proud to see their legacy carry forward to the current marketplace. Jason Tarpey has a quirky effect that adds that hypnotic, chill bump nature to his generally mid-range to slightly higher vocal delivery – the type of voice necessary to turn heads immediately once the first words of personal favorite “I Am the Hammer” strike through the airwaves. Most of the songs move along at a fairly consistent four to five-minute clip – and the two instrumentals “Blood Ice” and “Shade Gate” serve a dynamic purpose to carry home the epic atmosphere and storylines.

No doubt The Armor of Ire will be a big hit in Germany, Greece, and other foreign territories where they live for the past – but hopefully Eternal Champion can be embraced by the cult legions in North America as well. They certainly have the chops and understanding of the genre to excite and delight, so if the aforementioned Manilla Road, Cirith Ungol, and others of that epic ilk burn bright in your collection, this should slot in more than adequately.