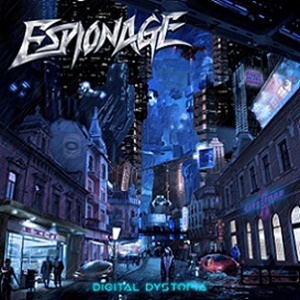 Friends of this scribe often referred to bands like Australia’s Espionage as sitting in that ‘Armored Saint/Metal Church’ syndrome where they were too heavy for melodic metal/hard rock followers, but often not heavy enough to the purists of thrash and extreme genres. Too bad for you, as you’ll be missing out on some great heavy/power metal done with passion and respect for that early period of development, circa 1985-1992. Building upon 2016’s Wings of Thunder EP, this full-length Digital Dystopia carries hefty riffs, impeccable falsettos and soaring vocal harmonies, and driving dynamic songwriting that screams heavy metal through numerous reference points to unsung acts of that bygone era.

Clichés may abound when it comes to certain aspects of the record – be it the 80’s keyboard soundtrack opening for the title cut, or the abundance of shout-a-long gang background vocals to supplement chorus impact throughout – but it’s hard not to get swept up by the infectious rhythm guitar foundation, fiery lead play, and high octane vocal prowess courtesy of bassist Andrew ‘Frosty’ Morris. Guitarist Denis Sudzuka lives for the hook that takes you to a speedy stratosphere, while not forsaking the melody content of the arrangement on hand – check out his work within “At Lightspeed We Strike” (older Helloween themes at heart) or the Vicious Rumors-like “Nightmare Approaches” (would have fit well on their self-titled third record for sure). Properly taking into account the need for diversity, the acoustic tasteful intertwining that opens “Haunting Horror” plus crowd enhanced effects for the short intro “Prelude to Power” should galvanize sustained interest, as Espionage understand the need to create an entertaining front to back listening on every successive pass.

Favorites can change by the day again – when you have a culturally uplifting main guitar hook for “Enter the Arena”, it’s hard not to sit up and take notice, beyond all the guest solo action for the longer lead break as members of Striker, Lord, and Envenomed among others participate in a fret free for all, as well as the Riot meets Master Control period Liege Lord effort “Light Begins To Fade” begs for battle anthem of the year status. Andrew’s voice is one of a kind – channeling everything from Tony Moore and Carl Albert to even at times Daniel Heiman during his Lost Horizon heydays – and truly gives Espionage that superstar edge in a genre that’s begging for someone to stand out from the hordes.

Add in eye-popping cover art and magnificent production values courtesy of Chris Themelco and mastering from Thomas Johansson and it’s easy to see Digital Dystopia hitting many critic (and fans) year end top lists. Power/speed metal with spirit, heart, and impressive songwriting, it’s great to hear once again a band like Espionage bringing this sound to the world.