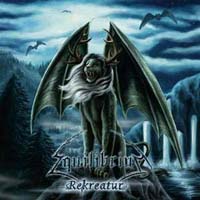 A band that is very much a conglomerate of everything that Pagan/folk/epic metal is (and that’s a lot), Equilibrium have yet to figure out what kind of band they are on their second album, Rekreatur. Their debut opus Sagas was passable, only for the fun and jovial “Wurzelbert,” a song that would make any hard-ass metalhead get up and do a jig, and while Rekreatur carries some of that glee over, it’s still not even remotely enough to establish the Germans as nothing more than average.

Lots of classic day Ensiferum being tossed about on opener “In Heiligen Hallen,” especially in the keyboard selections, which make attempts at sounding triumphant like the Finns do, only to a lesser effect. The Thyrfing-laden “Verbrannte Erde,” displays a brooding side to the band that goes nowhere fast, and the goofy “Die Affeninsel” at least is memorable, only for its awkward and fantasy-oriented keyboards.

Therein lies the problem with Equilibrium. Without an identity of their own, they’re left to wander through the wasteland of Pagan/folk/epic like a bunch of nomads. If identity is what they’re searching for, then staying on the goofy side of the fence like on “Der Wassermann” and “Fahrtwind” (which we’re guessing translates to “Fart wind” in German – great, very classy) would be their best bet. Of course, by doing this they’re instantly going to be attached to Korpiklaani, who have the “happy, dumb-ass” folk market cornered. It’s a lose-lose.

With Sagas, it appeared Equilibrium were too late to the folk metal party; with Rekreatur, they’re akin to the unwelcome guest who has no clue how to fit in, thus resorting to childish jokes (i.e. fart jokes) to fit in. With the cream finally rising to the top of this style (Suidakra, Tyr, Eluevitie), there’s no room for a band like Equilibrium and a an album as disjointed as Rekreatur.