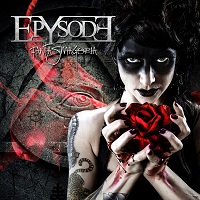 An album that belies the industry norm of recording one’s guest parts at home, Epysode’s sophomore Fantasmagoria saw each and every guest musician fly to Belgium for their contributions. Way to boost the airline industry, eh? Frequent flyer mile accumulation aside, the album is another in a line of conceptual power/symphonic metal albums, with a nice supporting cast that features Evergrey’s Tom Englund, Triosphere’s Ida Haukland, former Metalium singer Henning Basse, and more. Mainman Samuel Arkan was tasked with pulling it all together, and surprisingly, it’s more cohesive, less of a miscast blunder than other albums of this variety.

Stylistically, Epysode doesn’t venture too far into the epic/symphonic metal realm; there’s actually more teeth to a lot of these songs than meets the eye. Arkan, obviously, has tailored his songwriting to fit the specific skills of each vocalist, but the monumental solo section on “The Arch” is a winner, an early album highlight that sets the tempo. (Englund does his usual tall-guy-but-I’m-tender vocals.) Haukland gets the album’s best song in the form of “Morning Rose,” showcasing her distinctive, impactful caw that frankly, is almost too underrated at this juncture. (Let’s get a new Triosphere album, too.)

The crunchy metal shakedown on “The Black Parade” kicks around Symphony X-like ideas, while another Haukland jaunt “Raven’s Curse” sees her team up with Englund for a vocal battle that serves as the album’s designated climax. But in reality, the best jams are thrust to the top of the running order, and this is not necessarily a case of Arkan unable to come up with an album full of worthy songs, it’s just that “The Arch” and “Morning Rose” are so strong that they overpower the rest of the album. But hey, at least this thing isn’t some over-produced, unfocused mess. If Arkan cuts it down to just Englund and Haukland, then he’s in serious business.