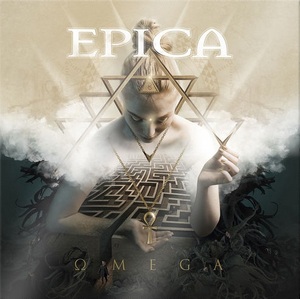 Ever the beacon when it comes to top-shelf symphonic metal, Epica always seem to find a way to live up to their name with their grandiose and bombastic sound. Even though it’s been five years since their last full-length (The Holographic Principle), there’s been no shortage of EPs, acoustic tracks, and cover songs in the time in between. But Epica’s eighth full-length is not to be overshadowed, and Omega succeeds in managing to one-up their sound yet again to exquisite results.

While the formula for the band’s strengths and successes is mostly set at this point, it’s in the way that they approach the songs that really makes the difference for Omega. The one thing that truly stands out in comparison to The Holographic Principle is the amount of dynamics to be found. At 70-minutes, this sort of thing is almost a prerequisite, but Epica makes it into something special. For starters, the songs outside of the towering gem “Kingdom of Heaven Part 3 – The Antediluvian Universe” are trimmed in size a bit. The term streamlined may have some negative connotations but for here it really allows the songs an added focus and immediacy. “Abyss of Time” leads the charge here, with instantly lovable and triumphant synths leading the way and making good use of vocal trade-offs between Simone Simons and Mark Jansen while the heaviness and urgency never relents. Peaks and valleys still exist of course, but it’s an incredibly strong lead-off track and really brings you in. “The Skeleton Key” uses some playful vocal lines from Simons to make it into an immediately noticeable track. “Code of Life” later on brings in some Middle Eastern influences to spice things up (“Seal of Solomon” does this too, but in a lesser extent). The contrast switch later on between the album’s sweeping and gorgeous ballad “Rivers” and “Synergize,” a driving and frantic track, helps to again make sure your ears are still fresh. That’s really the theme here – the trimming of these tracks actually helps to personalize them and make them stand out by drawing directly into their essence instead of beating around the bush.

The tracks on Omega are incredibly polished with TLC. The argument can be made that it’s just more Epica, but with tracks that are this impressive and worth discussing/dissecting on an individual basis, it’s hard to deny the overwhelming strengths and lasting impression that it leaves. Epica is one of the leaders of the symphonic world for a reason, and Omega makes sure it will be a while before they are unseated from that position.