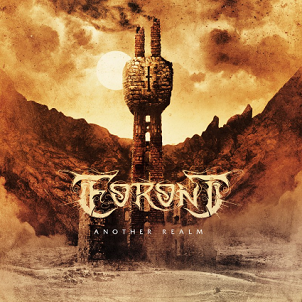 Score another for Russian black metal in 2017. The first was Grima, whose Tales of the Enchanted Woods is, for lack of a better term, “enchanting.” The same applies for their countrymen Eoront and their Another Realm offering. Formed in 2012, the band’s name is the invented world in the alternative universe with its own epos and legends, journeys, rituals, ceremonies and philosophy. After the 2013 release of their first full-length Neverending Journey, the band was scooped up by the reliable Code666, a label that has an impressive track record for signing up-and-coming black metal artists.

Displaying somewhat of a celestial focus on black metal (the atmospheric bobs and weaves here are what does the trick), Eoront, not surprisingly, are proponents of long-form songcraft. The dominant keyboard patterns of Valea are the main propellant, mainly on album highlight “The Glow,” where her keys manage to cover the song like a star-gazing blanket. Similar refrains emerge on “The Sea,” which in a way, remind one of the way Dimmu Borgir used their keyboard arrangements in their halcyon days, meaning, dominantly. Album closer “The Order of Light” heads it all off, compiling an array of moody melodies, jabbing blast beats and a vintage aura at the flank.

Recorded in such a manner that it does indeed recall those starry-eyed, promising ’90s black metal glory days, Another Realm is a perfunctory statement of atmospheric black metal circa 2017. And much in the same manner Grima managed to assemble a wooden, epic display, it takes another band from Siberia to forge another new path in black metal. Whether Eoront and Grima represent a totally new front in Siberian black metal remains to be seen, but, Another Realm’s triumphant glow is hard to ignore.