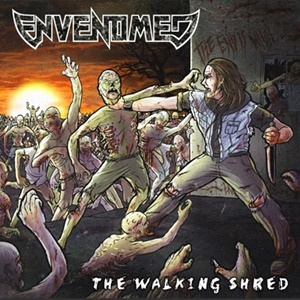 Australian metal continues to be a hotbed for musicians, many acts gaining international deals and worldwide touring acclaim. Already aware of this thrash band Envenomed from their previous Reckoning EP this scribe reviewed a couple of years back, El Puerto Records picked up the group and they’ve released their second full-length in The Walking Shred. Melodic thrash continues to be their preferred style, creating nine new songs (plus title track instrumental intro of 49 seconds) and a bonus ‘surprise’ cover that captures a sound that navigates between power/thrash, incorporating influences from North America and Europe equally.

As guitarists Brendan Farrugia and Anthony Mavrikis peel off some crunchy power riffs and intertwine this sense of thrash/groove at times that’s highly addictive to hair windmill, headbanging activities. Check out their work in “The Dead”, which shifts between Iced Earth power and Nevermore/Annihilator-like pounding to get listeners motivated, and the building solo break that delves into brilliant dual lead harmonies for the follow-up “Aware”. The rhythm section knows how to develop a tribal-like stomp into a steady swell of anticipation for what comes next – “Rebellion” possessing that Grip Inc. path while the gang-oriented one-word chorus cements itself in the brain. When the band wants to go into double kick glory, the galloping side comes out as “All That Remains” should get the punters dancing and thrashing about if Envenomed make this a set mainstay – drummer Adam Bartleson precise in his kit work throughout this number. Anthony has a potent set of pipes as a singer, coming from more of a traditional Russell Allen meets say Joey Belladonna delivery throughout, showcasing some serious range and attitude on “Abandon Hope” and the almost seven-minute ballad “Fate Closes the Door” (another nod to Iced Earth for pacing/emotional magnitude on this track). The bonus cut is Envenomed taking on the Lenny Kravitz hit “Are You Gonna Go My Way” – given some double kick and distortion makeovers, solid all around to bring the song more awareness to the metal legions.

Envenomed possess that cross-section appeal because they can be commercially accessible in certain hooks and melodies while also keep the power/thrash crowd pleased and begging for more. The Walking Shred delivers dynamic tracks that could keep the band top of mind for future international tour/festival showcases. 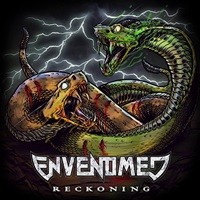