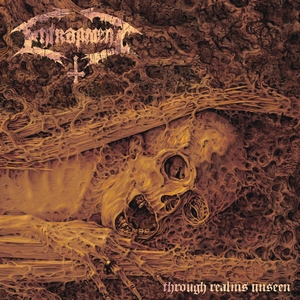 When it comes to old school Swedish death metal worship, you often see bands aping the ‘classic’ sound so to speak – Entombed or Grave’s early material per say, not so much the death ‘n roll years. But that’s exactly what Entrapment seems to be gravitating towards with Through Realms Unseen, the band’s third full-length album to hit the streets.

While in some ways it’s nice to hear the more death ‘n roll vibes hitting the speakers as opposed to the 2,000th version of Left Hand Path, the way that Entrapment blends the death metal with the rock-ish vibes seems to vary. On the one hand, you’ve got a real ripper like “Ruination” and the thick gallop of “Isolate…” that kick up more than their fair share of adrenaline with a focus on strong riffs. The death metal seems to push in just as hard as the rock vibes. Yet on the other end, the simplistic grooves of the opener “Omission” and near Southern feel of “Withering Souls” seem to miss their mark, with a number of riffs that just seem to fall flat. It’s not necessarily a speed thing either, with the melodic slowdown of “Dominant Paradigm” being one of the true gems of the entire disc. As you move through the album, much seems to come across as hit or miss, in part due to the meandering identity that veers between Swedish death metal, death ‘n roll, and southern-styled groove.

While some might call it eclectic, the songs of Through Realms Unseen just don’t have the consistency to warrant a full, end-to-end listen. If you have a tendency to bounce around a bit, there’s a few quite killer tracks within, but they happen to be surrounded by others that just seem to lack that same charisma. Bummer too, as their previous album, Lamentations of the Flesh, seemed a much more cohesive listen.