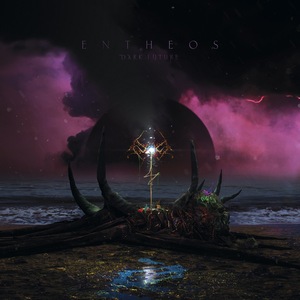 Entheos hit the scene with a big splash back with their Primal EP back in 2015 due to the members involved. Last year, their first full-length The Infinite Nothing served to increase their visibility with its unique approach to progressive and technically-driven death metal, as did continuing to hit the road thereafter. Things continue to expand for the act with their second release, Dark Future.

Progressing the core that built their sound in a natural way, Dark Future has some notable additions to the Entheos formula. For one thing, the album has a darker and cinematic vibe to it. The melodies and progressive elements have a more atmospheric nuance to them, and the synth pieces push them into more eerie territory. “Melancholia” is the best example of this, with its suiting dark melodies, coupled with some intense polyrhythms and groove, and explosive points of aggression. The band also tries their hand at 2 2-part songs, which both do a good job of lining up these contrasts and capitalizing on them. For instance, “Inverted Earth (I)” brings a cinematic scope to the melodic end, and “Sunshift (II)” then goes straight for the throat before easing into some esoteric yet heavy grooves.

The strong point is still just how hard it is to pinpoint and describe their sound to a tee. As mentioned, you have the feral intensity of death metal, but then you turn the corner and are hit with some rather progressive rhythms, or atmospheric moments that take things into a different direction. But the band makes it work, and with the addition of the space-y vibes, it feels like the band have identified an even more individualized approach. Part of this vibe is also due to vocalist Chaney Crabb’s addition to her arsenal with robotic/synthesized vocals in a few songs (such as “White Noise”). While they may polarize some of the fanbase, they do fit the mood of the music, bringing a different feel to it.

Entheos continue to explore what works for them as a band, furthering their sound and progressing their uniqueness on Dark Future. Their vision is beginning to really meld into something that could project the extreme metal scene forward – melody with aggression, atmosphere with intensity, and technicality with groove. 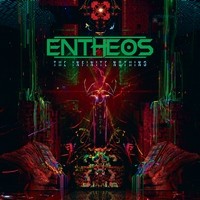