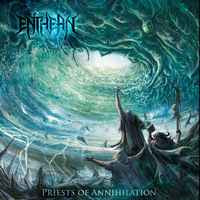 Bringing up the classic ‘how does one classify this’ question completely to a head, South Carolina’s Enthean bring up plenty of subgenres on their debut long-player, Priests of Annihilation. Melodic symphonic technical black death metal? Sounds like a mouthful, and in the end, a needless way to describe this promising act. This is one you’ll want to hear for yourself.

As already awkwardly described above, Enthean bounces around the subgenre map, but with a purpose behind it. They do a nice job of capturing the essence of the ‘90s Scandinavian black metal sound (check out the beginning of “1054”), but instead of simply aping it and calling it a day, they decided to bring more to the table. They enhance the formula by bringing a good chunk of death metal into each track, elevating the brutality but also the technical wow-factor as well. “Dysthnasia” starts off running with a more intense death metal backdrop, with some occasional technical flourishes. But nothing gets in the way of the song itself, with also uses synths and more melodic elements to make for a memorable track. That in turn, is the true success of Enthean’s sound. By never sticking to just one playbook, the band is free to weave in plenty of influences at will. With only a demo under their belt previously, the result sounds far beyond their years. Take centerpiece, “Before You, I Am,” a 7*minute track that pulls in sweeping and epic riffs, some acoustic atmosphere (with chanting no less), fiery leads, and culminates in a strong mix of black metal majesty with deathened riffs overlaid on top.

An impressive debut, Priests of Annihilation finds equal footing in both death and black metal territory and working the two fields into one that is stronger than either could be on their own. Being able to find such a broad stroke and genuine appeal without compromise leads this writer to believe Enthean will be turning plenty of heads as they move forward.