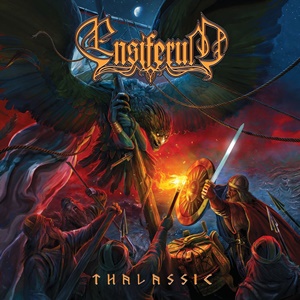 The Finnish folk/ melodic death metal veterans traverse along to album eight for Thalassic – a first for the group in terms of creating a ‘theme’ album (relating to the seashores and water stories of the world in history, myths or legends), but not limiting in terms of a specific region or time period as tales from Andromeda to Greek mythology enter the fold. This record also features a new keyboardist/clean vocalist in Pekka Montin, while the band return to producer Janne Joutsenniemi who last was involved in that capacity back on the album From Afar in 2009. As you take in the dynamic songwriting and performances, you’ll notice that the bombast, the speed, and heaviness are there along with the cultural/folk aspects and general sweeping atmosphere that can make Ensiferum a fun group to treasure as you jig, swing, and headbanging to these tracks.

Wisely choosing to accentuate the bigger, mead-hall chorus melodies and sinister/catchy guitar / keyboard interplay for the first single “Run, Women, Victory”, you immediately know Ensiferum mean business, guitarist Petri Lindroos roaring through his noted harsh vocals as the galloping guitars give chase throughout this quick hitting affair. From the record fluctuates between the folk and melodic death sides – the group understanding proper context and song flow to give the listeners a variety of ballad / mid-tempo head turning offerings against the speedier numbers, always ensuring larger than life hooks on both the vocal and musical landscapes. Pekka’s clean, commanding voice allows Ensiferum to reach wider heights for the ‘singing’ aspects – check out his phrasing and register grace during “Andromeda” as well as tradeoffs with Petri and bassist Sami Hinkka during the Celtic-driven “For Sirens” – the keyboard work for the latter hinting at some of the triumphant/ war-like nature of Sabaton. The additional sonic aspects from violin to bagpipes by Lassi Logren during the slower, evolving epic “One With the Sea” work wonders against the electric underpinning, the chorus sure to illicit unison crowd participation should the band add this gem to the live setlist, while the subsequent “Midsummer Magic” proves the band can get their full-on folk metal swinging side on, gang/main vocal tradeoffs and another jig-worthy guitar/drum sequence, as the band ‘run naked in the fields under the bright summer moon’.

Celebrating 25 years together as a band, Thalassic proves the Ensiferum train isn’t running out of ideas or the ability to still execute them on the highest level possible. Don that warrior gear, adorn thy faces with proper paint and set sail with the quintet – as it’s engaging, fun, and showcases all sides of this folk, melodic death band. 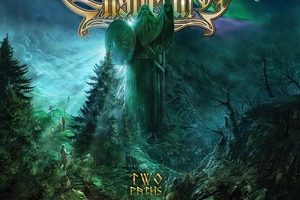 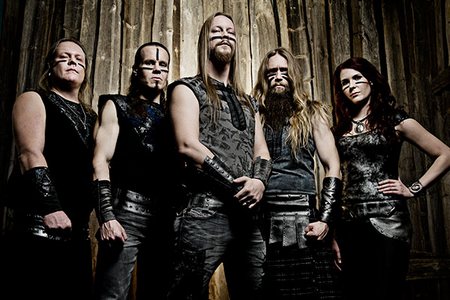