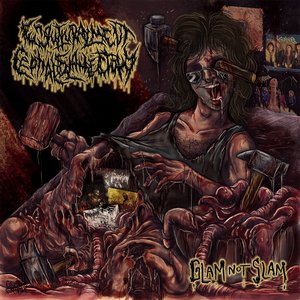 Talk about having a name that’s a mouthful! But Engutturalment Cephaloslamectomy is definitely playing tongue-and-cheek with their particular brand of brutal, slamming death metal (not that you couldn’t figure it out from the name). As the band’s latest release, following up a 2014 EP, Glam Not Slam is surprisingly balanced for an act that may initially come across as just a parady.

You already know the basics of slam, and so do Engutturalment Cephaloslamectomy when you dig into the album. The guitar tone is effectively heavy, but they don’t overdo it to the point where it just sounds silly. The slams deliver the exact punch that you’d expect from such an act (see “Some Kisses”), and this is mostly due to the fact that there’s clearly some planning and thought put into the build-up and execution, instead of flailing by jumping straight from blastbeat fury into a chugging slam section. Some grooves are nicely implemented too, such as on the Toto-inspired “I Bless the Slams in Africa.” This brings us to one of the band’s main selling points – their humor and self-awareness. Musically, the band can stand just as tall as other acts, but doesn’t deviate too far from the norm – it’s brutal and enjoyable. But tracks like “Worthless Intro You Will Skip” and “Pour Some PItriffs on Me” are bound to give you a chuckled with their satirical naming. With how excessively gory the subgenre can be, it’s nice to see a group that has a sense of humor to go along with it.

Glam Not Slam isn’t going to revolutionize brutal death metal by any means, but it’s a well-done release that genre fans will appreciate. Alongside a sense of humor that is really just the icing on the cake itself, it’s worth diving into for your daily dose of slam.