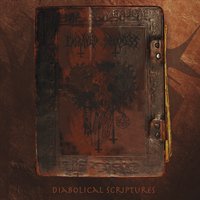 They say first impressions last. Fortunately for Engraved Darkness it’s not always so, or Diabolical Scriptures would have gotten a much harsher review. Here’s why: The very first track off the album, ”Night Rising” is a meandering piano prelude featuring midi strings straight from the 90’s. The piano sound, while decent, cuts off in strange places and the overall feel is of a shoddy production from back in the day. The tune itself would have been fine with proper sounds, which makes it all the more annoying considering how easy it is to create something decent-sounding in this age of pre-packaged orchestras and simulated instruments.

The album’s second track, ”Darkened Grave”, leaves the midi orchestration behind in favor of a peculiar drum and bass intro which moves into a bland thrash/death hybrid that does nothing to further the interest of the listener. Add to that a rather gritty production reminding more of a mid 90’s demo than a full 2016 album and you’ll understand why I was ready to write this off after just the first two tracks. Fortunately I stuck with it. With prolonged exposure the material took off into new and unexpected regions of thrashy death metal with melodic parts that might have been found on an 80’s speed metal album. The production suddenly started to make more sense as well, actually working for the material rather than against it. Songs like ”Ritualistic Sins” and ”The Purity of Evil” reeked of a time when thrash, death & black were jumbled into an amalgam of extreme metals.

Clawing it’s way out of the ”90’s demo” pit and well into the ”90’s album” category, Diabolical Scriptures actually turned out to be a rather groovy death metal entity. Had this been released back in the day, it may well have been hailed as groundbreaking. Now, it doesn’t quite reach that level of praise, instead becoming more of a nostalgic trip for those who long for the days when CD was king, production more or less experimental, and genre definitions a lot more blurry.