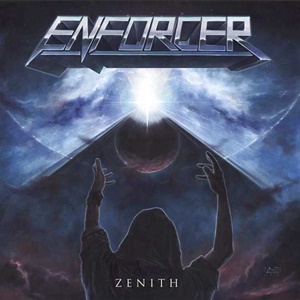 Evolution occurs in a veteran band naturally – musicians gain experience and mature, wishing to expand their horizons based on what they learn, what they see, and what they feel. In many metal genres, said evolution can be met with disdain or abandonment – during the 1980’s, albums like Turbo and Cold Lake sending shivers to long-timers in the Judas Priest and Celtic Frost camps. Enforcer have been on a hot streak through their first four studio albums – but after touring the globe for a couple of years on their last effort from 2015 From Beyond, the band clearly wanted to regroup and reassess their next move. Gaining a new guitarist in Johnathan Nordwall to replace Joseph Tholl, we have Zenith to entertain us – and it’s a grower in terms of the shifts in songwriting outlook, additional instrumentation elements, and overall output that probably will bring debate and love it or hate it verbal discourse.

Let’s get to the twists right off the bat. Piano parts and a lower register AOR-ish/melodic rock background vocal takes “Regrets” into a ballad territory not like most in the business – Olof Wikstrand expanding his normal high register into different scales for lower and mid-range activities that showcase more of a tender, emotional side than ever before. There are differences in terms of heavy metal riffs and interplay between the rhythm section and guitars during “Sail On” for instance that seem a bit more California hard rock meets slightly progressive, while the initial single “Die for the Devil” opens with chord combinations and a Jonas Wikstrand drum slam straight out of “Fantasy”/Aldo Nova school before becoming more of an 80’s mid-tempo anthem, the chorus planted firm in the Sunset Strip. Elsewhere the standard speed/heavy combinations with Olof’s piercing vocal delivery and exhilarating lead breaks haven’t gone away – you’ll get plenty of that for “Searching for You” and “Thunder and Hell”, the latter containing some interesting tremolo bass/guitar syncopation that rival Iron Maiden during their peak 80’s years as well as a quiet semi-classical acoustic ending.

Overall Zenith could be a game changer in Enforcer’s career – because they really took their time to focus on individual parts and aspects song to song to squeeze out more melody, more harmony, more diversity – and tread new horizons beyond the speed and heavy metal platform firmly established. Definitely not making From Beyond Part II, the band take a step forward valiantly – it will be up to the public to decide if they continue to appreciate what the quintet offers, or bolt for safer pastures.