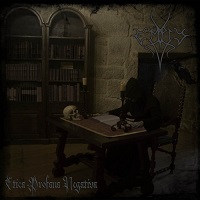 Who would’ve guessed that some of the darkest orthodox black metallers reside in Spain? They’re dark and mysterious, skulking in spookiness, condensed in a spectrum of shadows, and filled with various shades of gloom, yet they call themselves Empty. They denote the cryptic mysteries of nonexistence, death, and emptiness, but what they concoct in their music is by no means empty or void of anything.

Etica Profana Negativa is a dismal domain of sonorous darkness that completely immerses you in cold, bereaving terrors that send you into a moribund daze. With their passion for death and creeds of nihility, Empty practice their macabre rituals with sacredness held in many manners. Etica Profana Negativa was even recorded during summer solstice in a recording studio called Moontower – how’s that for sorcerous values? Empty formulate pure, genuine black metal with only the finest soul-swallowing ornaments embellished in the morbid beauties hidden within death, sorrow, and lunacy.

If you have a taste for long-sustained spine-chilling screams, hair-raising howls, and skin-crawling hisses, just the most exquisite delicacies of all harsh vocal styles, Empty provide more than enough to satisfy such cravings. And, they have an idyllically composed blend of atmospheric to metal eminence, entirely dressed in black. Bassist/lead vocalist Drizzt, guitarist/backing vocalist Vanth, guitarist Orgall, and session drummer Nahemoth act as reapers of all that is lively and light by delivering solely what is dark and deathlike. Their lamented to demented metal is both gravely somber and fiercely hateful, and their songs sound like they were channeled straight from woeful voices of the dead. Besides its spirit-shattering title, the raw, austere, agonizing screams throughout “The Funeral Song be Sung” will show you what I mean, and it is just one of the seven funerary black metal arts that frame the elaborate phantasms of Etica Profana Negativa.

While the color black is the absence of color, it carries a more potent hue than all colors, and that is precisely how satisfyingly saturated in blackness Empty are. When it comes to raw, negative, doleful, altogether, eternally devout to the dark-side black metal, with works like Etica Profana Negativa, Emptystand on the pinnacle of the subgenre. The noose is tied and we can hear something calling us to vanish into an abyss of pervading darkness, or that might just be the sound of Empty’s record spinning. Either way, nonexistence has never seemed so welcoming.