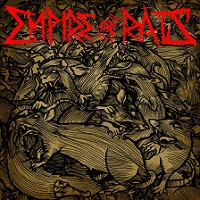 Yet another drop in the heavy-handed bucket of spite and vitriol, Columbus, OH’s Empire of Rats dole out a lot of unhappy, frothy hardcore/metal barbs on their self-titled debut. It’s the delivery of the vocals that makes the album angry dude-ready, not so much the septic riffing and barrage of down-beating, but in the quick amount of time the album’s 11 songs come to hang out, one will probably feel less about themselves…and life in general.

The band could probably saddle-up next to the ultra-heavy Nails and the ultra-hardcore Ringworm and come out not worse for wear. The two bands might be the proper identifiers for Empire of Rats’ sound, and even though they avoid the Swedish trappings so many of their contemporaries get suckered into, the concussed jamming of “Another Minute in Hell” and “Rats Reign” give subtle nods to the likes of Disfear and Martyrdod. Still, the lashing and bashing heard on the groove-oriented “Untitled” (the best song in the lot) as well as stormers like “Little from the World” and “Exposed” are choice, pit-ready numbers sure to swallow sweaty bodies whole.

Presently, there is no shortage of aggro hardcore metal in the marketplace, but slotting in a band like Empire of Rats isn’t a bad idea. Like, how can one not feel the fire, fury, flippancy, and every other f-word associated with metal of this variety?