Veteran conspiracy theorists and tech-death specialists Embryonic Devourment are back with their third full-length album, Reptilian Agenda.  Continuing the band’s theme of an apocalyptic take-over by a reptilian race that has slowly been integrating into our society is certainly a bit more high-concept than the usual murder and maim lyrics brought forth by most in the scene.  Unfortunately, the music doesn’t quite give the intriguing concept enough space to fully stand on its own.

While the music is technically sound and executed with plenty of skill, Reptilian Agenda is a textbook case of over-teching an album.  The guitars can’t seem to stick with one idea for more than a few seconds, missing the mark with memorable riffs and instead going for the overly flashy (squeals, widdlies, and the like).  Occasionally, things do slow down with a nice melodic lead, like “Whilst the Rich Dine,” but it’s challenging to come up with anything worth coming back to once the disc ends.  Lastly, the vocals mostly stick to gruff, mostly unintelligible barks, furthering the inability to discern anything memorable.  Not to mention the missed opportunity with the rich lyrics.

If there is one glowing positive here, it’s the production.  The drums, while frequently blasting, do not drown out the rest of the band.  Nothing really dominates the mix, and it’s even possible to hear the bass!  A rare and pleasant surprise indeed.

There will be plenty that will shower Reptilian Agenda with tech-deathy praise.  But the simple fact remains that it takes more than mere technical ability to craft a memorable song.  What is the point of a tech-ridden album if you can’t remember it when it’s finished playing? 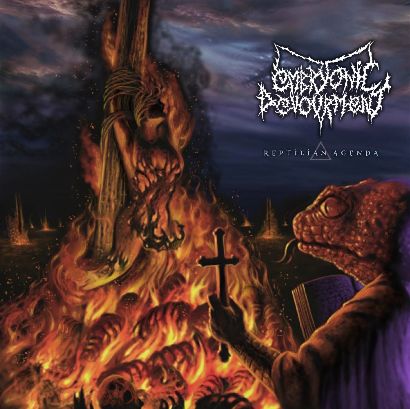