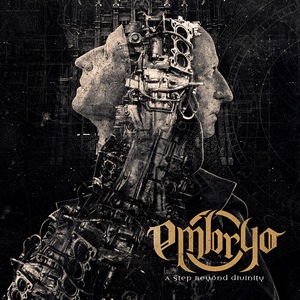 Plenty of symphonic death metal coming through the pipelines nowadays. Rightly so, with the success of acts such as Fleshgod Apocalypse to look towards. Embryo is a symphonic death metal act from Italy (like FA), and A Step Beyond Divinity is the band’s fourth release. Things seemed to have clicked on their third album, with A Step Beyond Divinity releasing two years after their self-titled 2015 release (as their prior efforts took significantly more time between).

The initial first impression is that Embryo owes more towards the melodic death metal movement than that of a purist death metal stance with keys. Despite some menacing growls from Roberto Pasolini and sometimes kicking it into the blastbeat zone (“The Horror Carved”), there’s never a lack for melody. But this is far from a bad thing. Melodies aren’t entirely tied into the synth either, though they do certainly set the tone and weave a intricate webbing into the band’s sound. Chunky riffs contain a solid punch to them (“Looking for the Divine”) and also contain some catchy groove to them. Slower tracks tend to hold a bit more melody, with cuts like “Bastard of the Brood” really diving into the atmospheric synths and mid-tempo riffing, not to mention some great leads. If there’s a downside to it all, it’s only that it stays very safely confined in the symphonic death metal arena. There’s nothing you haven’t heard before with A Step Beyond Divinity, but it doesn’t really damage the experience either.

A Step Beyond Divinity is a solid piece of symphonic death metal. It’s energetic, occasionally touching (without resorting to clean vocals), and still manages to keep things heavy from beginning to end. Melodeath and death metal fans should be able to appreciate this one for what it is with ease.