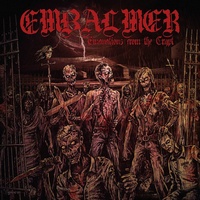 Hells Headbangers 2014’s re-issue of There Was Blood Everywhere was a pleasantly grotesque reminder that Embalmer was a force to be reckoned with. The dark and sadistic tone of that EP is well deserving of the cult classic designation that it has given in some circles. It’s been 10 years since the band’s first full-length (the unfortunately underwhelming 13 Faces of Death), and the band seems hungry to spread the Embalmer name to bludgeon a new generation.

Starting things frantic off the bat, “Dead Female Stalker” sets the tone for the remainder of Emanations from the Crypt. The swirling guitar riffs, spastic blastbeats, and crazed vocals (now of Paul Gorefiend) are what you would hope to expect after a quick refresher from the There Was Blood Everywhere EP. The title track breaks away from the beginning of the album’s speedy openings, and offsets with some dingy and doomy riffing before getting back to the fast stuff. With many songs in the 2-minute range, expect short blasts of primal aggression that quickly and sometime erratically swing from point to point, giving the listener the maximum brutality possible in the time frame. One real upside to the album is the production, which still retains an old-school flavor (akin to the EP) with plenty of dirt and filth to enhance the sonic abrasion, but it’s not completely filthy to the point that you toss it aside and find it to be incoherent.

A full-length effort that sticks to the roots of the band and upholds the high marks of their beginnings, Emanations from the Crypt will please those looking for some death/grind done the old fashioned way. Hopefully this one starts a whole new beginning for the veteran death metal act. 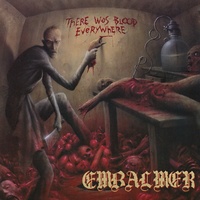