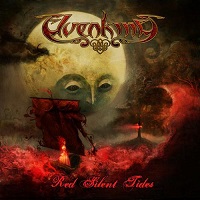 Elvenking’s last “proper” (and by “proper” we mean not acoustic like 2008’s Two Tragedy Poets) studio album The Scythe was a real charmer across the board, the type of modern power metal album that effectively bridged the past and the future. The Italians have the necessary melodic snap, as well as the propensity to not stumble over themselves when they traverse down dragon/fantasy territory, so consider interest for Red Silent Tides to be piqued.

True to form, Red Silent Tides is a lot like The Scythe, minus a few world-beating numbers. It occasionally drifts into non-metal territory (or sounds likeYellowcard

…haven’t decided), but the kid-like pipes of singer Damnagoras (think a junior Michael Kiske) mostly keeps this album afloat. Mr. Damnagoras has the ability to carry songs like “Runereader” or play the power metal piper, like on “Silence De Mort.” Any way it’s sliced, the man is a more of a focal point than ever, and should be exploited if Elvenking wants prolong their career.

here are touch-and-go, namely “The Cabal,” which is a quirky folk rocker, “The Last Hour,” which is a weak ballad rocker with a chorus that would make say, Warrant get excited, while the soft “This Nightmare Will Never End” expresses the tender side of Elvenking that was ever-present last time out, but here, it’s not as convincing.

Untapped potential is the troubling thing with Red Silent Tides. By toning down their off-kilter, somewhat folksy power metal angle, Elvenking is gradually heading toward traditional rock/metal territory, which could totally negate the pipes of Damnagoras. With a name like that, negation is not the way to go. The Scythe ruled, Red Silent Tides does not.