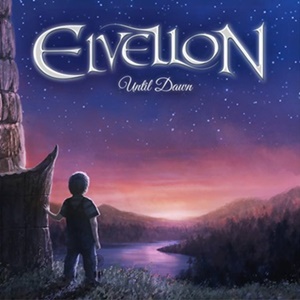 A dangerous trend can happen in any sub-genre when leaders vault to superstar status – especially as younger musicians aim to establish their presence in the scene but fall prey to emulating those heroes. In the case of symphonic metal, there’s no one bigger than Nightwish – able to survive significant singer switches to still command small theater/ arena headlining gigs depending on the territory, as well as top billing in the coveted summer festival circuit. Which makes it a struggle to fully appreciate the debut full-length from German band Elvellon – because they’ve been around since 2010, issued a couple of singles and Spellbound EP, and with Until Dawn struggle to establish something that’s outside of the conventional symphonic formula that makes things their own.

It’s as if the quintet check off all the proper boxes: semi-operatic vocalist, cinematic orchestration, brooding songwriting that can be heavy one moment or angelic and serene the next, and themes that carry the listener off to the Middle Ages as easily as fairytale lands. Keyboardist Pascal Pannen layers his symphonic textures with that natural piano/ivory underpinning, setting up the enchanting melodies of Nele Messerschmidt during the epic “Fallen into a Dream”. The exotic hand drums and acoustic spirit of the short instrumental “Of Winds and Sand” gives the record a mid-album interlude reprieve, while “Dead-End Alley” contains that minor guitar/keyboard combination against a playful Nele-oriented delivery that mirrors “Storytime”. Areas of improvement need to occur though when it comes to the album set up “Spellbound” – at 4:05 it’s too protracted of an opener and would have been much better at half the time, as well as Elvellon possibly taking more chances the next go around to establish their own ideas, twists, and adventurous side to a genre wide-open for those possibilities.

Until Dawn is definitely not the worst symphonic metal record this scribe has heard since the development of the genre – it’s just too predictable to establish Elvellon in the long run if they wish to create any ripples in already deep waters.